86,934 POWER members around the world 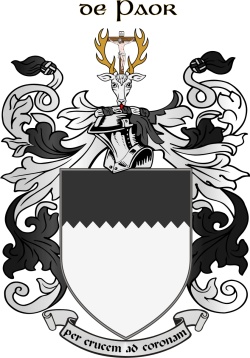 Design your own POWER Family Crest

De Paor is a Gaelicised form of an Anglo-Norman name, which as such has two possible origins. The second origin is the one attributed to Irish Power, by both standard authorities: P. Woulfe, 'Irish Names and Surnames' (1923) and E. MacLysaght, 'The Surnames of Ireland' (1985).

Origin 1. From Old French 'Pohier', a native of Pois in Picardy, brought to England by the Normans at some time during or after the invasion of 1066.
Origin 2. From Old French 'povre, poure', meaning 'pauper', which Woulfe et. al. interprets as someone who has taken a vow of poverty; also arriving via the Normans.

Woulfe thought that as the name appears in Ireland early on as 'le Poer', the second origin here is the relevant one. He seems to have accepted this 'neat' from C. Bardsley, 'A Dictionary of English & Welsh Surnames' (1901). MacLysaght clearly follows suit ('Irish Families', 1985), and en suite the several works depending on these two authorities. It is unlikely, however, that Woulfe had come across the first origin. In any case the 'le', meaning 'the' in French, would be equally applicable to the first origin i.e. le Pohier is a native of Pois, 'the man from Pois', le Poitevin is a native of Poitiers, 'the man from Poitiers' etc. The Gaelic form susbstituted 'de' for 'le', as in De Brún for 'le Brun', the brown-haired man.

The Power dynasty put down roots first in Co Waterford; Robert le Poer arrived probably in 1176 in the wake of the Norman 'shock troops' of Strongbow (Gilbert de Clare). The book written by Giraldus Cambrensis (Gerald of Wales alias Gerald de Barry) 'Expugnatio Hibernica' ('The Conquest of Ireland') contemporary with the actual events, mentions Robert le Poer. He seems to have been King Henry 11's man. Henry, half Angevin half Norman, and a native of France, perhaps wanted to keep an eye on the Welsh-Norman barons who were carving up Ireland for themselves. According to legend, Robert died fighting the O Tooles in what is now Co Kildare.

It was in Waterford, and to some extent also in adjacent counties, that Power became a numerous surname; in fact Power tops the list for Waterford in the 1890 birth registration figures.

The 1659 'Census' of Sir William Petty, a Cromwellian survey of Ireland and its inhabitants, has Power as a 'Principal Irish Name' P.I.N.) where we would expect to find it; Power also appears as a 'titulado' or landholder/gentry name.
Co Waterford:
9 Power (all P.I.N. families except where stated) in Decies (all locations given here are baronies) + 2 Power tituladoes, Pierce and John; 11 Power & Poer in Cosmore & Cosbride; 12 Power in Glanahiry (Glenahiry Barony); 130 Power in Upperthird + no less than 10 of the name as tituladoes(!); 138 Power in Middlethird; 69 Power in Galtire; 8 Power in City of Waterford.
Co Wexford:
7 Power in Bargie (Bargy Barony; 16 Power in Shelbyrne; 11 Power in Bantrie.
Co Tipperary:
21 Powre in Iffa & Offa; 16 Power in Eliogurty + Peirse Power, gentleman.
Co Kilkenny:
8 Power in Gowran; 8 Powre & Poore in Iverke; 8 Power & Poore in Knocktopher; 9 Power in Kells; 8 Power in City *& Liberties of Kilkenny.
Co Cork:
Insignificant.

R.E. Matheson, the Registrar General compiled a 'Special Report...' on names,based on the 1890 births distribution figures. For Power, of the 272 births, all except 17 were in Co Waterford! It ranked 54th in the top 100 surnames in Ireland that year, and it was the first in Co Waterford.

A footnote on the Arms: generally the simpler the blazon the more ancient the coat of arms; and this is true of the Power arms. Strictly speaking it was the Normans who introduced personal arms into Ireland, in the sense that they were used on the continent, as means of identification in battle. This practice was adapted to the Celtic association of animals/emblems with tribes and families. The Power arms are a model of their kind.

Tyrone Power (1795-1841) actor and writer, born either in Co Waterford, or in Swansea, Wales of Waterford parents. It was written in a 19th century source that his real name was Powell; this is unlikely in the opinion of the present writer. He performed in both Dublin and London. He spent some time in the U.S. and published in 1836 'Impressions of America'. He went to the states again in 1840; he embarked on the steamer 'President' in March 1841 for the return voyage, but the ship was lost at sea.
His namesake, the American actor Tyrone Power (1914-1958) whose dashing good looks won him a devoted following as a Hollywood screen idol from the 30s to the 50s, was actually the great grandson of the foregoing. His own ancestry was a mix of Irish, English, French and German!

Ned Power (1929-2007) hurling hero of Co Waterford in the 50s and 60s. He was part of the team that won the All-Ireland, against Kilkenny, in 1959. Added to this honour were the three Munster provincial titles. He played for Tallow GAA.

Henry "Harry" Power was born in Waterford (1820-1891). He was an excellent horseman and became one of Australia's famous Bush-rangers. Henry "Harry" Power was a fearless and daring rider and bushman, but never killed police or his victims. He broke from prison several times, defied the police in the Ovens District for a decade and was finally convicted through an informer. ( For more information, please check the comments below)

Tell us about any famous POWER (or surname variant) you think we should add here. We will get our genealogists to check them out and add them to the list. Thanks!

Join the conversation with the POWER tribe

Henry"Harry" Power was born in Waterford 1819/1820. His father is believed to have worked as game-keeper to the Marquis of Waterford, this is where Harry learnt his excellent riding skills, he was always around helping in the stables, they gave him riding lessons and they trusted him with any of the horses. Harry was transported to Tasmania (Van Diemen's Land) Australia in 1842 on the convict ship "Isabella" under the name of Henry Johnson Index number:36754 Record ID: Name_Indexes: 1405820. About 1847 as a free man went to New South Wales, all was good until 2 drunken troopers stopped him and drew on him, from there he was in & out of jail & became a bushranger. He was an excellent horseman and became one of Australia's famous Bush-rangers. He was also mentor to Ned Kelly, teaching him how to ride to avoid the law. There is a look-out in Victoria named after him, Power's Lookout. Harry never killed anyone, he was known as the gentleman bushranger. I cannot find any information of him in Ireland. I believe his mother was Anne McGuire (her maiden name). Harry Power died in Swan Hill, Victoria on the 11/10/1891.

My ancestor was Morgan Power, a farmeryeoman from County Wicklow who was transported to Australia in 1797 for being in possession of 26 stolen sheep. If there are any other known descendants of Morgan in Ireland I would love to hear from you. W. Power.

My Family Tree DNA has placed me as a Breton so Im all over the British Isles. Old Britain and Ireland and France way back when on my Paternal side. Havent Done my Maternal side as yet.My parents were cousins 16 or 17 times removed. They have a common ancestor back in the early 1700s America before it was the USA.

Areas of Origin for POWER

Write an email address and click 'Invite' to share this page with more members of the POWER tribe.

Discover where the POWER Family members live around the world

Show off the POWER Family Crest…